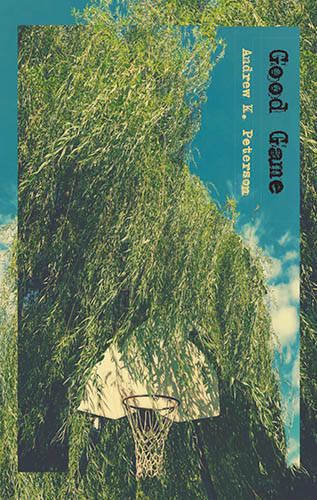 Andrew K. Peterson delights with his hyper-kinetic squall and offbeat feed of guerrilla poetics in his new collection, Good Game. im-ing the dead, he walks among ghosts in his present urban world where he inserts himself as bard and actor into the fabric of the life he occupies as poetic invention/intervention spins out new poetic intention as social practice and justice. How else but through small spats of langue and experimental poetic interruptions might one administer a daily dose or literary recompense to their community hoisting up the poor and downtrodden and unheard? Among faces hungry without recourse. “The heart-as-usual grid and groove was on the up, but the feel was off. Thus we turn to the streets in these times of treble.” And these times of treble, we witness the deep-seeded underworld streaming as social commentary in a “pink pink punk swoon”—under the cover of the ‘moon’s hood’ in the ultimate Good Game. —  Susana Gardner

“A muzzle of light/ lifts off a tired old /riff, blinks green” – In the poems of Good Game, words and phrases ignite glints that catch and draw the attention of others in currents of about-to-be form. Playful runs, breakups, and re-constitutions of grammar, phrasing, and tone move the floor as well as the furniture your mind is sitting on. Enjoy a multi-level, intersectional ride in the light of Andy Peterson’s words. — Reed Bye

Andrew K. Peterson has given us poems for the chaos and swirl of life, intertwined with the delicious and glittering beauty of the world. His expert wordplay makes you dizzy with wonder, while, calling out disturbances and losses, death, rebellion, collapse, heartbreak and disappearances of all kinds. Underlying this devotional tension, is an unrelenting desire to improve, honor, acknowledge and lift up the vacancies, deconstructions, landscapes and failings of the fragile human condition. These poems make you believe in poetry as a change agent, they give you something to hold onto within the disarray. These poems are a “singing back against the roaring”. These poems are sounds left on stoops and street corners, expertly, intentionally, gloriously and with light. — lark fox

In ​Good Game, ​Andrew K. Peterson has demonstrated, yet again, a determined proclivity for subtle humor, a playful attention to popular culture, a remarkably dazzling wit, with undertones of gentle prosody that leads his readers through poems warmly lit by conflict of politics, relationships, personal identity, and a necessary sensitivity, intimacy, and respect for humanity so often lost through the missed connections of our lives. I absolutely love this book! — Joseph Cooper

What is it to be a player in any game, to say “good game” even when you don’t want to, even when you don’t mean it? Peterson delivers us through similar meditations led by language’s music – the melody but also the reverb – playfully recognizing the weight as well as the levity of this world where we Americans now reside and the players of this game that are likely anything but good. These lyrical and skillfully sonic poems reckon with change and how the end result isn’t always a vast shift from where you’ve started. This collection moves through the feeling of losses, of shaking hands with the enemy, touching its scaly hand, and going through the motions of formality, while wishing to say literally anything other than “good game.”  — Charlotte Seley