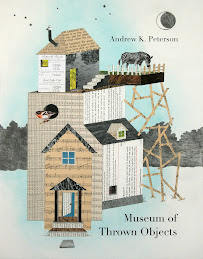 What some people said:

Andy Peterson’s poetry combines visual art, both his own and some found elsewhere in the universe, with words redolent of mystery, thrillers, clues and riddles, and does so in a far more intelligent and sustaining way than present popular literature — while not adopting any sense of “superiority” to same. Museum of Thrown Objects is a terrific “read” and a likewise “look” as well. — Anselm Hollo, Guy Fawkes Day 2009

Imagine an ocean leaving its bed to hover above itself, where it should not be, to form a “silhouette” visible against an “afternoon.” The technology of displacement is deployed, in Andrew Peterson’s brilliant book, to create: not “delay” but “fusion.” It makes sense, then, to build a museum out of artifacts that would, in the wetness beyond architecture, disappear by “low tide”, but are instead “kept.” Locked away in a decaying archive, “the thrown objects” form perverse alliances when the lights dim. Where the genitalia should be, for example, are “leafs and bugs.” Intra-species, foaming, future-soaked, and with a “metallic corsage” delicately sewn to the wrist, the figures in Peterson’s poems come to get you. And they do. They get you and take you somewhere until: “we are all here together in our new place.” — Bhanu Kapil

Museum of Thrown Objects exists as a poetic architectural phenomenon. Peterson constructs a kaleidoscopic wunderkammer of lyric, vispo, and conceptual experiments. Reading/Performing through its various wings I am activated into an environment of idiosyncratic relations. Things/Objects/Words have a collaged and artificial sensibility; as if Peterson is laughing at the overbearing seriousness of our contemporary museums with some incredulous anarchistic cut & paste. The difference between encasing an artwork behind glass as a stale and defined representation of some imagined mastery and staging things/objects/words in a dynamic and active performance of potentiality. This museum is enacting a perception embedded in things as much as in ourselves and, to me most importantly, things and selves in relationship to each other. Peterson, and the reader emerge throughout as poet-collectors (curators) in the process of mapping and performing transformation and relationship. Museum of Thrown Objects instructs the reader/performer: “Do not deny you are the work of art.”. And so doing provides as it performs a dialogic and critical ethics of reading. We experience Peterson experiencing and thus find our own museums everywhere. — Jared Hayes

Travis Macdonald’s goodreads review:  “Andrew K. Peterson’s Museum of Thrown Objects is a painstakingly crafted poetic curation of eloquent knick-knacks, electric birdsongs and syntactical calisthenics frozen in time, re-contextualized according to the whims of a brilliantly obsessed librarian. Each of these exhibits being equally imbued with the strange and sometimes grotesque beauty that characterizes the unique and fantastic verse of this eminently talented voice just now emerging, it should come as no surprise: You will find your mind wandering the aisles of this collection long after the book has left your hands.”

Scott Abels’ goodreads review: “Three different handbooks of Joy! What’s not to like? This is a collage curated by the spirit of Ted Berrigan, with the alien charm of Jack Spicer leaking from the heart. Peterson’s collection of objects is an experiment in salvaging our century with John Wieners. Among the imagination, iambic pentameter is a series of industrial cuts of meat. Something was broken, so Peterson the surgeon making a monster necessarily introduces the idea of vegetables to language. Then: some healing. Then: some unity.”